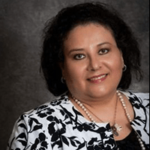 Lair is the Community Liaison for The Ohio Latino Affairs Commission and has worked for the state for almost 9 years. Marin-Marcum is the Latina Mentoring Academy Chair that is on its 9th Academic cycle. She leads the Hispanic Chamber of Columbus Education committee not only with the LMA, but also with the Managing your Business Series workshops. Lair sits as well on the South-Western City School District Education Foundation board and serves on the Women for Economic Leadership Development “WELD” National Board. Marin-Marcum received the 2013 LULAC Ohio Woman of the year award. In 2014 Marin-Marcum was highlighted in the 5th Edition of the Who’s Who Latino Columbus, and in 2015 was chosen by the National Organization Women for Economic and Leadership Development Organization as one of the Women You Should KnowTM in their WELD corporate calendar.

Lair was brought up between the USA and Spain and studied Economics in the University of Minnesota and Universidad Complutense de Madrid. She studied violin & voice at the Music Conservatory of Madrid in Spain. Lair continues to perform at local venues, churches, conferences and events as the national anthem singer. Marin-Marcum holds a Spanish-English bilingual interpreter & translator Diploma from the Universidad Complutense of Madrid and is an Ohio Supreme Court Provisional Certified Legal Interpreter.

Marin-Marcum began her professional career as a Training Manager in Canon Europe and her past work experience includes Executive International Management & Marketing for Virgin Records, the Operational Events Marketing Director for Europe, Middle East & Asia at SAP Global and in Nationwide Financial in the Corporate Insurance Markets area.

Lair’s other volunteer work encompasses The Red Cross of Central Ohio, The League of United Latin American Citizens “LULAC”, LEON, Doctors without borders, The Centro Guadalupe, Habitat for Humanity, The Mid-Ohio Food Bank and The American Women Baptist Association. Lair’s passion is focused in working with all minority & diverse communities and is a strong advocate for Music, Arts, educations, entrepreneurship & Women leadership. She is married and lives in Grove City, Ohio with her husband Tim and stepdaughter Mackenzie.