IMPORTANT NOTICE: Read the letter from the HCC President and access COVID-19 Resources 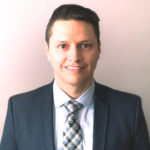 Pedro Falconi is a Financial Advisor at Cetera Investors. His career has been mostly to serve the specific needs of the Hispanic population in the different banks that he has worked for in various communities. Over his 10+ years in banking and financial services industry, he has worked for Fifth Third Bank in Louisville, KY and most recently he serviced the Hispanic community while working for Bank of America in Providence, RI where he earned the highest recognition in banking by becoming a member of the Pinnacle Club (Top 1% of Personal Bankers nationwide at Bank of America), just to name a few.

When he isn't drawing financial plans for his clients, Pedro enjoys spending time with his family and playing soccer in local leagues trying to score a goal or two.

Pedro is very excited to be part of the Hispanic Chamber of Commerce Board to serve the local community. He is especially excited to bring his expertise in financial matters because he believes that learning how to navigate the financial system in this country is crucial for the not just short-term, but long-term well-being of individuals, their families, and their businesses.